Hey everybody! Just a chill Sunday afternoon, and it dawned on me that it’s been over two months since my last writing (Ishikawa Body 180SX). I must say that article was a highlight for me, and I thoroughly enjoyed writing it. All the time in the background, there was work being done on prjktMAYHEM EVO VIII, and it has only been a little less than a month since we finished base-lining the car.

The last time I wrote about the EVO was 09 November 2015, and it was basically the first time since I purchased the car in June 2011 that I actually started to do something with it. The reason for the long delay is because at the time, I was starting a new job overseas as a contractor, and the job was full time a year at a time. One thing led to another, as life goes, and I had my first opportunity in the fall of 2015. It was nothing more than upgrading to an ETS 3″ front mount and piping system along with a TiAL BOV, small battery, Hallman MBC, Torque Solutions billet engine/gearbox mounts, new shift knob and Sparco steering wheel. January/February 2016 amounted to replacing the OE radiator to a Koyo drop-in replacement with SAMCO Sport hoses, new water pump, new HKS timing belt, Gates power steering/accessory drive belt, and some other minor upgrades. This stuff was because of a catastrophic failure of OE coolant lines going to and from the intake manifold while I was making my way back to Virginia from Alabama. I didn’t want to chance things going bad anymore, but as time marched on to this year, the car was not what it could be because I bought a car in 2011 from a dealer and I did not have any idea what had been done by the previous owner, and even with care, the car was degrading due to age (2005; the car is 13 years old). Not willing to keep chasing problems, I decided now is the time to finally figure out what is in this car and what it needs. I am not going to lie… I never really had a deep love for the car because it was an unknown and it had the fingerprints of somebody else in it.

Why did I buy it? I have worked on EVOs, specifically EVO VII previously in the Middle East, but that was years ago, and I know these cars are phenomenal and there are not many left in the USA (EVO VIII 2003-5; IX 2006-2007) because of accidents and other human-induced folly. Lastly, I am at a point in my where I do not sell anything, and my life is no longer my own (legacy/thought of the future for my children).

Soooooo… May 2018 rolls around and I was at my local Walmart to get some stuff for my pending return trip back across the pond to my normal work place. As I was walking back to the EVO, I was approached by a guy named Kyle and his friend, both who had noticed I was walking to my car. The conversation started up about the EVO and how good it looked. We talked about what has been done, etc.. The usual car talk stuff. Kyle mentioned that he works at Boost Division. I replied that I have heard that name a few times from guys like Matthew Douglas. Kyle said that Matthew’s car was actually at Boost Division for some big budget build. I said I needed to work on the EVO, but I never have the time to do so. He said to come by and talk to Michael Kessler, the owner of Boost Division. Kyle also mentioned Spec-Ops which was a shop in Fayetteville, NC at few years ago and Michael’s association with it. Intrigued more than anything, I just wanted to see what’s up.

I rolled into Boost Division on a Saturday afternoon with my family, and I met Michael. I mentioned to him that Kyle mentioned the shop and that a few others have posted things about Boost Division in VA Beach EVOs, and I was interested in getting some work done to my EVO, namely an errant coolant smell that seemed to come and go (remember that I had a coolant failure a few years ago; I was skittish still). Michael came outside the shop to see the car which was still running, and he noted that it had more than a possible coolant problem. He noticed the periodic surge, the BOV opening even under slight throttle and that the tune in it was not good. I just took it all in. He said that if I wanted, they could take a look at it but it would be a while since there were other cars well ahead of me that had been scheduled. I said I was leaving to go back overseas in a few days, and I would like for Boost Division to look the car over because I owned a car I knew very little about from a history standpoint, let alone what was inside the engine (stock or built?). He said they can do everything, and after getting to know a bit about Michael and from the client list of friends we have mutual connections with, I said I’d get back that evening on what all I wanted done.

Well… that “all I wanted done” which I forecasted would cost me in the range of $7K started to steamroll to the right. That train didn’t park until it was well above $20K.

Before anything happened, a solid look at the engine and the compression was checked. It was 170 across all four, and the strangest part was that there was not a spec of carbon build up at all on the piston tops for an engine that has 91K miles on it. I knew the car had cams in it, but didn’t know their make nor duration. We found out that they were GSC S1 cams with stock valve springs/retainers. The engine still had the EGR system in place, and it was removed later in the process.

The parts that went into the EVO were:

I started also with some exterior pieces to get rid of the previous owner’s fingerprints:

Now that the car has been base-lined and with fresh/current technology and a solid tune, prjktMAYHEM EVO VIII made 484 whp 365 lbs/ft torque at 23 psi on 93 octane. It took 18 iterations to get there with a very smooth HP and torque curve, and the cool part was that it did not knock once! I attest this to Aaron of English Racing and the guys Eddie, Kyle and Ray at Boost Division.

Since the base-line, I have ordered:

Ordered and already received are VOLK RACING/RAYS ENGINEERING TE37 SAGA 5×114.3 18×9.5J +22 Face 4 (deepest concave for this size/dimension) in bronze and in diamond dark gunmetal. For this procurement, I used both Mastermind NA and Boost Division. You may wonder why I didn’t just place both orders with just one, and the answer is that when I tell someone, especially in business, that I am going to do something, I honor that. In business and in life, I am pretty much Japanese, since that’s what I am half of anyway. But why two colorways? The answer is mutliple- I like both colors, these are real wheels, and I own multiple cars that I can change these with.

Let’s look at some pictures…

While waiting on everything to start the base-lining

The parts… well some of them…

Starting with the clutch and the rear differential install… 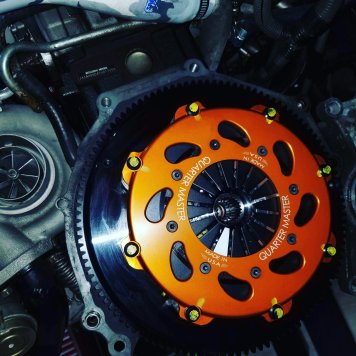 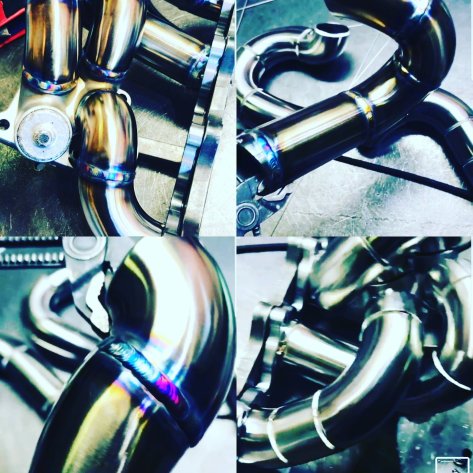 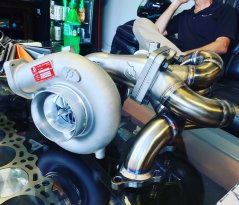 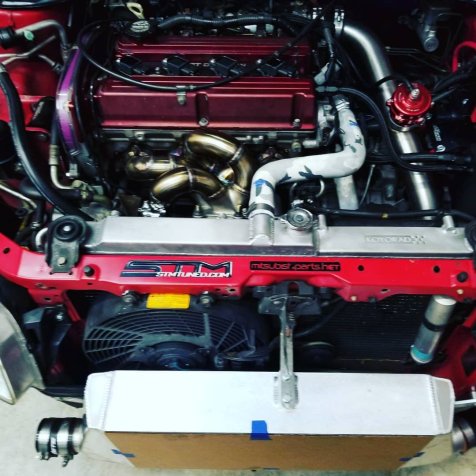 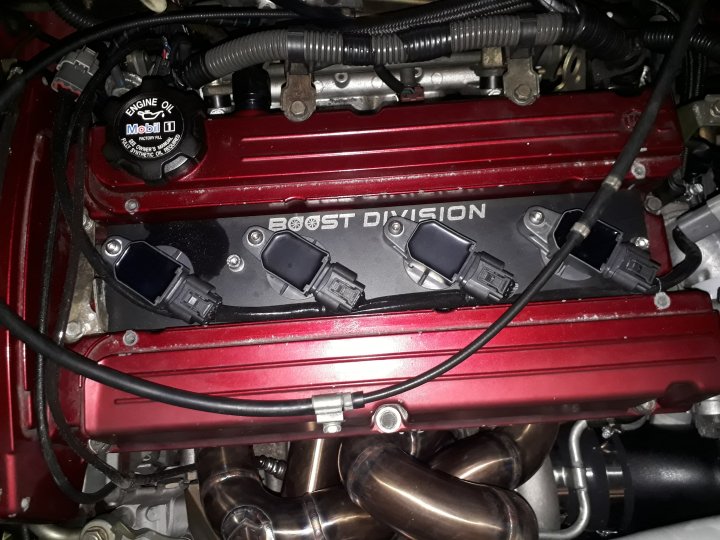 While everything was getting done, the front bumper, front lower lip and rear bumper came back from paint. Putting the OE Mitsubishi EVO IX front bumper and lower lip assembly on. See how that 4″ ETS sits phenomenally inside there.

How she looks now… 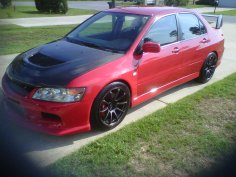 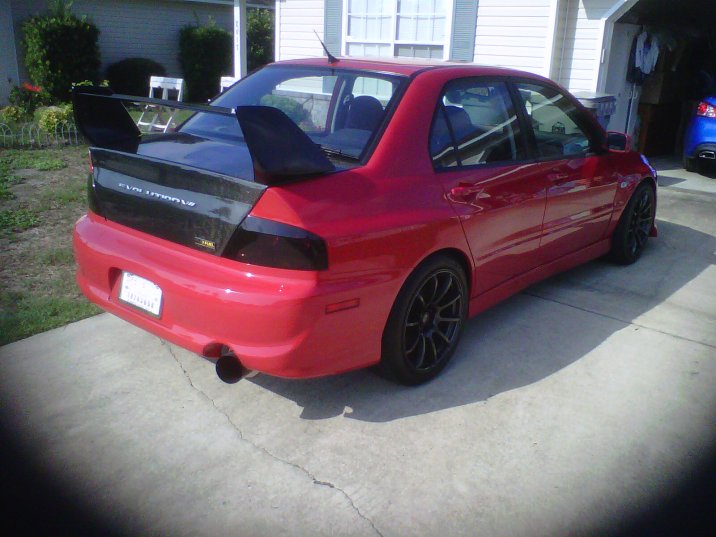 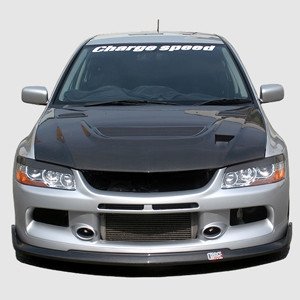 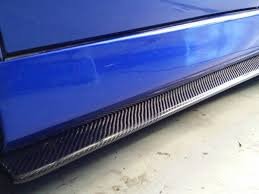 And of course… what is a car without authentic VOLK RACING/RAYS ENGINEERING TE37 SAGA? These arrived over the week… 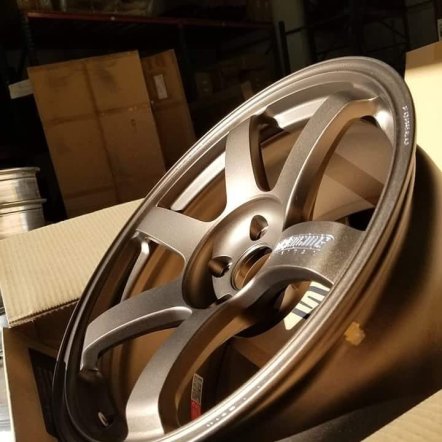 All of this would not have been possible without cooperation/collaboration with Boost Division and Mastermind NA.